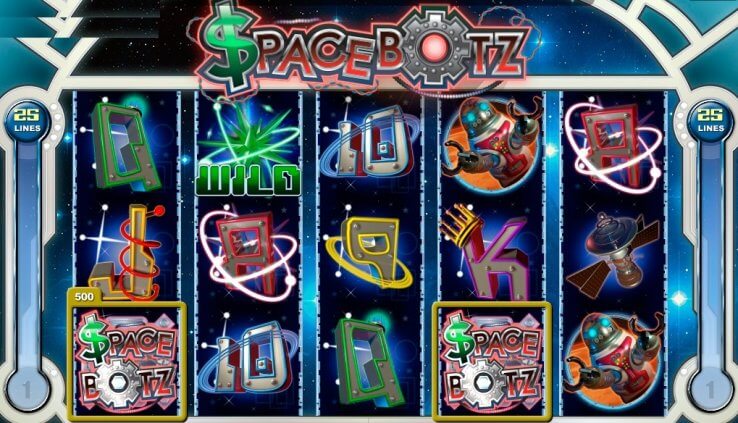 Spacebotz slot game is a Genesis offering with five reels and 25 lines available for players to work with. The bet per line range is a wide one, extending from 0.01 to 10, and there is a maximum payout of 1 000 times the player’s wager up for grabs.

The game features a scatter; a wild; free spins and an autoplay option, and can be enjoyed in both free and real money modes at the online casinos supporting this platform.

Space is a very widely used theme for online slots games, and many feature elements that have come to be associated with this fascinating topic, including aliens; star wars; and intergalactic travels to distant planets. Spacebotz slot takes this theme one-step further, delivering a traditional setting with a tongue-in-cheek twist, and allows players to enjoy various robots as the heroes of the adventure.

The robots in question have been created specifically in order to explore the outer regions of the atmosphere, but an error has caused them to malfunction, and resulted in them attempting to assert control and conquer the planets they were intended to report back on.

The reels for the Spacebotz slot game will present players with a variety of different robot icons, along with letter and number symbols, which include the playing cards ranging from nine through to ace. The wild symbol for the game is a green star, and the scatter icon is represented by a logo for the game itself.

Not only do the wild green star icons form paying combinations on their own during the Spacebotz slot game, they are also able to stand in for any missing symbols the player may require. Scatter symbols will pay out no matter where the icons land on the reels, and two; three; four or five of these will grant the player two; five; ten or fifty total wagers per spin respectively.

Should players manage to land between two and five of the scatter symbols he or she will be able to enjoy the free spins feature, consisting of five complimentary spins of the reels. The wager for this portion of the game is tied to the bet amount and amount of paylines in the round which triggered it and all of the robots on the screen will transform into wilds while these are played out. The icons for Spacebotz slot are displayed along three rows extending across the screen, and players are able to make use of special symbols; free spins and advanced options during play.

Players are able to choose how many of the 25 paylines they wish to activate for each round, and can then further decide how much they wish to bet per active payline. Payouts are made for identical symbols falling in place alongside one another along an active line, beginning at the first reel on the left-hand side of the reel and extending across. This is one of the most exciting slots games you can enjoy at any River Belle casino available to Canadian players today.

Only the biggest payout per line is accorded the player; and any winnings are immediately reflected in his or her account.